In addition to purposeful photographs of flowers, flowing waters, unusual rock formations, natural textures, broad landscapes and the rising or setting sun, I often uncover interesting details to capture that inspire other types of art in my mind. The images that follow are such renderings with the core elements all derived from the images I collect on my various wanderings. Each piece is composed from different parts of origin – see if you can discern/guess the most important component(s) in each one….

Thanks for looking – I hope you enjoy them! 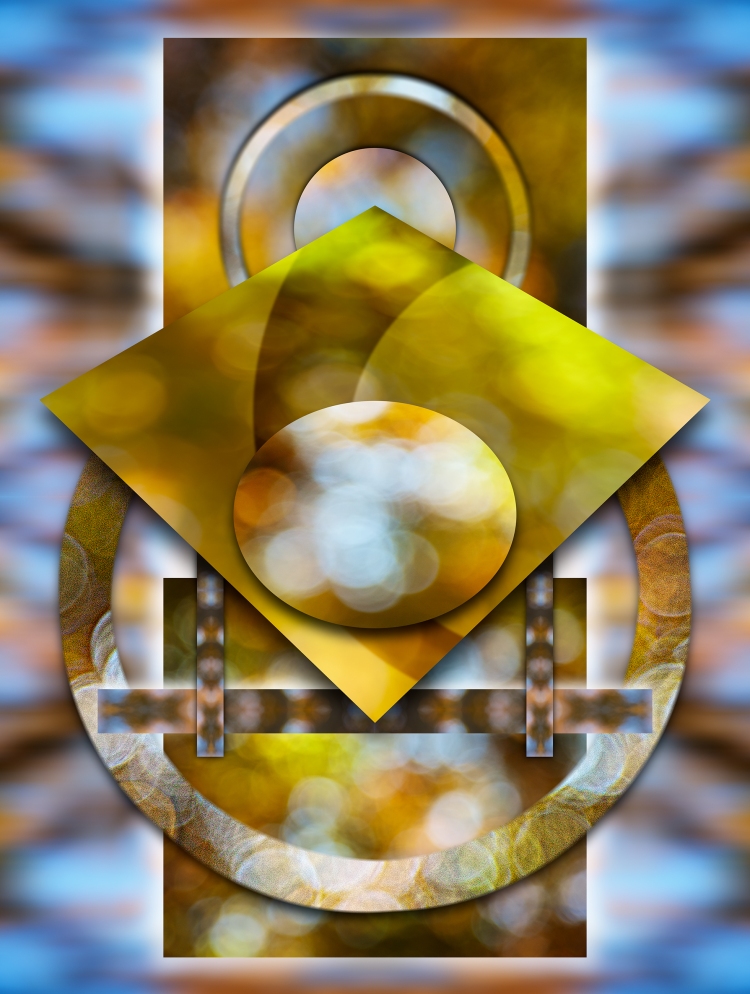 All images ©2017 by Bill Deuster. For personal use only.

It was back in the early 1980s that I had a rather humbling experience. It would be one that changed me a bit, though I didn’t fully understand its importance until many years later.

My girlfriend at the time wanted to take a day trip and suggested Antietam, the Civil War battlefield in Maryland where, in mid September of 1862, General Lee decided to move out of Virginia and north into Union territory. The 17th was to be the bloodiest day of the war and, though many thousands lost their lives, it was a battle that decided nothing.

It was a dreary, overcast day on this, my first visit to Antietam. At first we drove around the battlefield with no specific intent as I really had no idea of the significance of what I was seeing. After about 30 minutes of driving the park driveways, we crossed a highway that runs thru the battlefield – then down and to the right and up into a very large field edged with aged, rough wooden fencing that I presume was authentic for the 1862 time period. At the top of the hill was a tall stone tower with a place to park. We stopped and climbed up into the tower to look out over the battlefield in all directions.

The moment I reached the top, I felt something quite overpowering and as I began to scan out over the fields, I wanted to cry. I could feel a surging energy of sadness and sacrifice. Of unbearable pain, fear and anguish. I sensed regret and longing that life was cut short by the carnage that happened that day. No one personality emerged, just a torrent of collective consciousness that made me aware of how many were lost and how much potential was exterminated.

While this experience stayed with me, I did not revisit Antietam until a number of years later. And I did not begin to photograph the battlefield until after 2000. I now try to visit a military cemetery every Memorial Day to send prayers of thanks to those who have done the hard, sometimes thankless work of military service, especially combat in faraway lands.

I did the commemorative posters for Antietam and Gettysburg back in 2009. I wrote the poem about Gettysburg National Cemetery in mid 2008. This is the first time I have posted any of them in public. 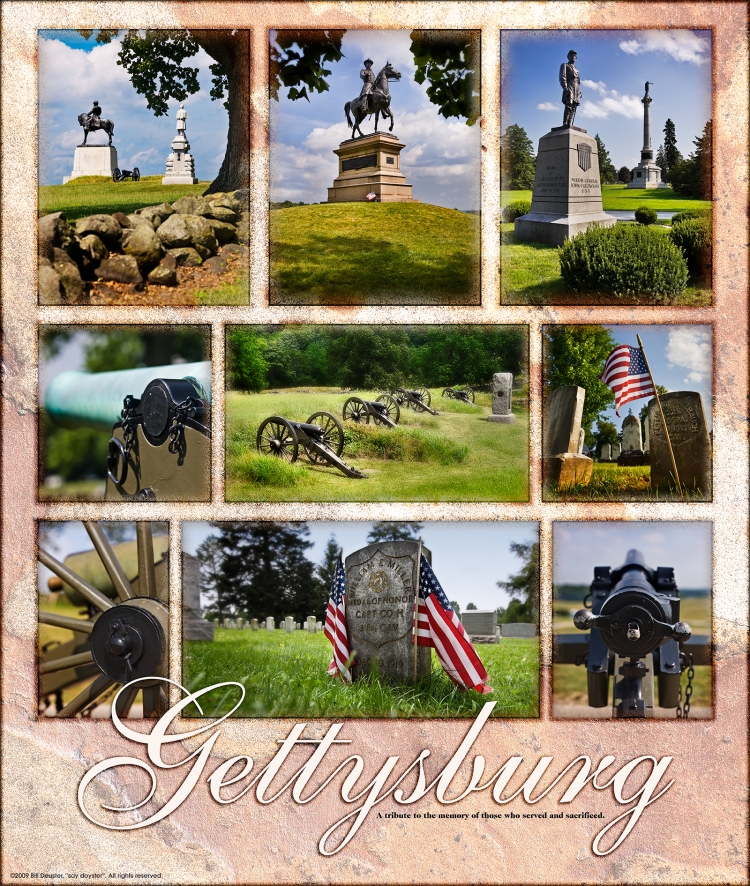 Battlefield valor and the carnage of war
Renders ground hallowed; and burial stones mark
This sacrifice with enduring tribute to those
Who died for principles greater than themselves.

Gettysburg is such a place of honor.
Its fields and cemetery – quietly, serenely beautiful –
Assert a powerful homage to the efforts of so many
Who cried, bled and died for the betterment of others.

When I ponder the sacrifice, I consider this
Pain and suffering in a larger context of ideals
To which our inner voices persistently allude;
As though linked to an ever present source conscience.

What invisible intelligence renders our transient bodies
With a longing for justice, goodness and equality?
What hushed voice whispers such powerful ideals
That a human being willingly endures pain, even death? 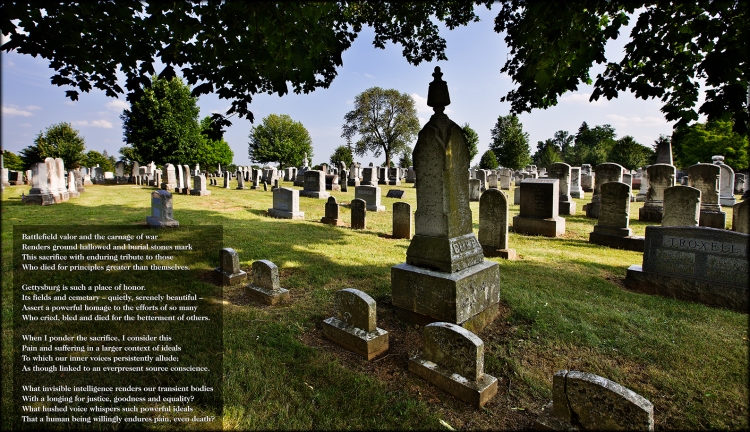 ©2017 by Bill Deuster. All rights reserved. For personal use only. Thanks for looking. Comments are welcome!!

Sometimes my mind catches a small wave of inspiration that sends me down a pathway that defies definition. This poem and its accompanying image is just such a journey. Sometimes if I am unable to meditate enough, I discover rough wrinkles of thoughts that create their own voice. I hope you will ponder this with me. Thanks for looking!!

Looking skyward elicits a sense of freedom
That begins in the eyes,
Journeys to the heart,
And rests fulfilled in the soul.

There is a quality of infinity
That opens the mind,
Expands the imagination
And rivets a sense of possibility.

I ponder a birds flight
That looks so playful and curious
So high up in the ethereal blue,
But is more likely task and duty bound.

Then I notice the intruding fence;
A symbol of boundaries,
Restrictions and limitation,
Of oppression and slavery.

I think of the history of the fence
And contemplate the duality of its purpose –
Protector or rejector
Enslaver or provider of safe harbor.

Then I reflect on the nature of the mind
And its ability to live within blurry boundaries;
Cordoned off by invisible ropes
That imply a certain sanity.

Denial and falsehood
Are hallmarks of a properly adjusted modern mind;
Wisdom and truth
The by products of wrestling with lies.

It is the fence and the sky
That symbolize a duality
So important to the battle
Between opposing opposites.

Truth is a lie
In the eye of the non-believer
And a lie is the truth
In the mind of the empirical slayer.

There is no resolution between
The sky and the fence;
Just an uneasy truce
That humbles even the wisest mind. 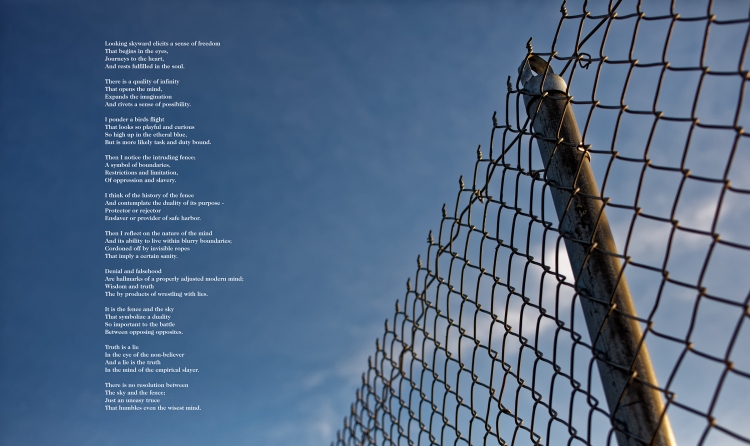 All content ©2017 by Bill Deuster. May be used for personal use if so desired.

Though a bit late, here is wishing everyone a Happy 2017. I hope we all have many more!!!

While it was not the night before Christmas, it was, nevertheless, a moment of high energy and expectation. It was the moment more than 25 years ago when I had a bit of inspiration to begin a series I have called Faces. Since that time, I have created more than 50 images that loosely fit into the description of a “face”. I have not done any for a couple of years, but I wanted to share several that were created in the early 2000’s. I will post a few each month for the coming months until the various compositional styles have been revealed.

I don’t know about you, but the open road for me has an attraction far greater than just the immediate scene or where I am going at the moment. I don’t why the vision of an open road has such a powerful emotional draw, but it does move me in ways that words fail an adequate description.

Below are several “open road” shots that I took in Iceland back in late September. Iceland is a land filled with an endless supply of such scenes. Note that, though these were shot over several days, the sun was a very shy player.

I am curious how the view of an open road may move you. Let me know 🙂

Back in September, I spent a few days in Iceland, a must visit destination for a variety of reasons. Though I shot a fair number of landscape photographs, I also had my eye out for unusal details that might inspire an art piece or two, three….

The two images that follow are based, respectively, on detail shots of a large lava rock formation and an area of lava pebbles of varying shapes and sizes.

The first piece – “Lava Rock Abstract” – exists as a 40″ x 30″ giclee 12 color fine art print. The dark details of the various formations are endless as is the inspiration they provide. I hope you enjoy this exercise in natural elements providing the basis for abstract art.

The second piece – “Lava Pebbles Mosaic” is a 12 color giclee fine art print that measures 32″ x 42″. It has as its essence a bed of random lava, pumice pebbles (try and say that five times rapidly, LOL). These are quite common in Icleand, but when you get down close to them they are beautiful and full of personality. 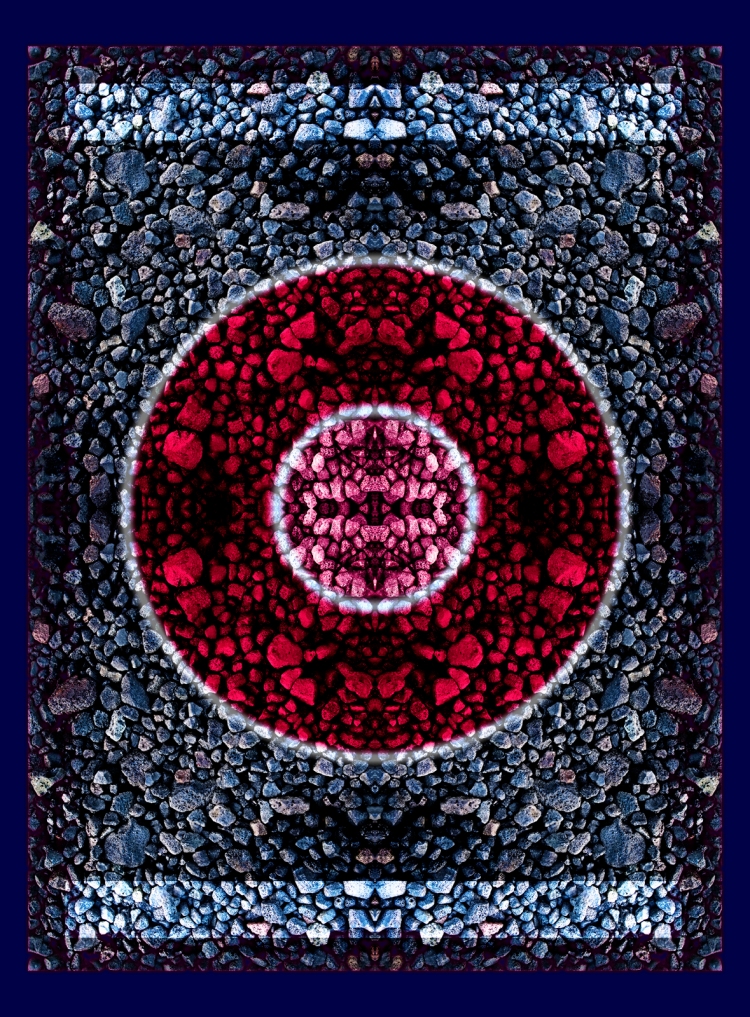 ©2016 by Bill Deuster. Please enjoy these images for your personal use only. Thanks so much for looking – drop me a line if you have a comment or question.

Articulated Pictures
Create a free website or blog at WordPress.com.