I have been researching and building my camera car mount system for many months. I have shot a fair amount of footage (to be posted at a later date) using different combinations of the parts that will be described/shown here and am quite pleased with the capabilities that I now have to mount a camera almost anywhere on a car and get acceptable to very stable footage.

The parts that make up this system are as follows – 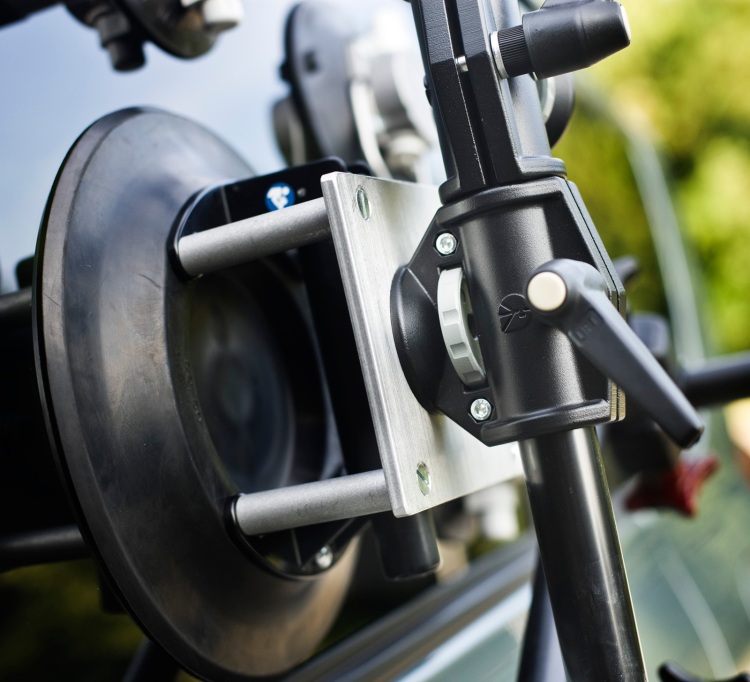 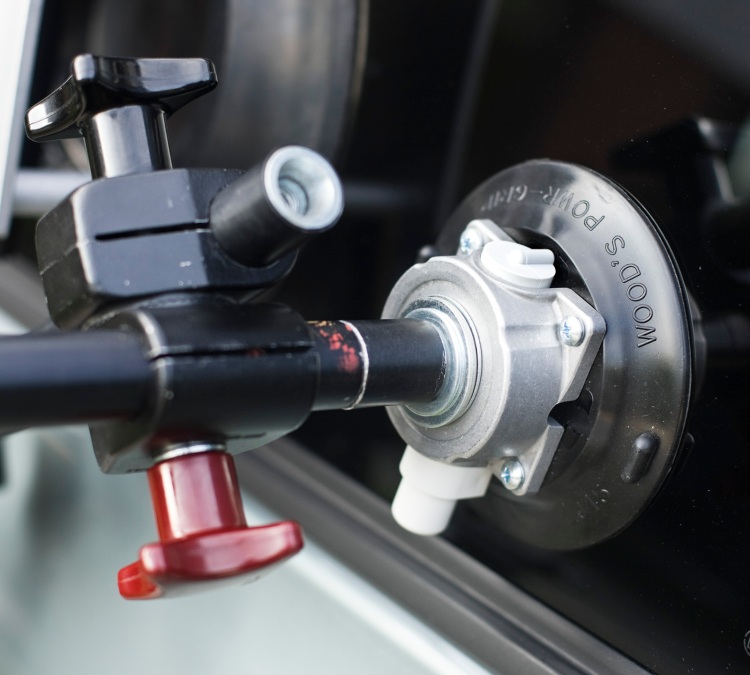 Shown mounted with a Foba Combi Tube attached. Note that the system for securing the camera is based  on 3/8 inch 16 threaded studs to which a Combi Tube may be attached.

The Manfrotto 131 DDB tripod crossarm to which I can mount my Giottos MH 1300 657 Ball Head (modified with a Giottos 621 quick release plate that came with my CINEslider). 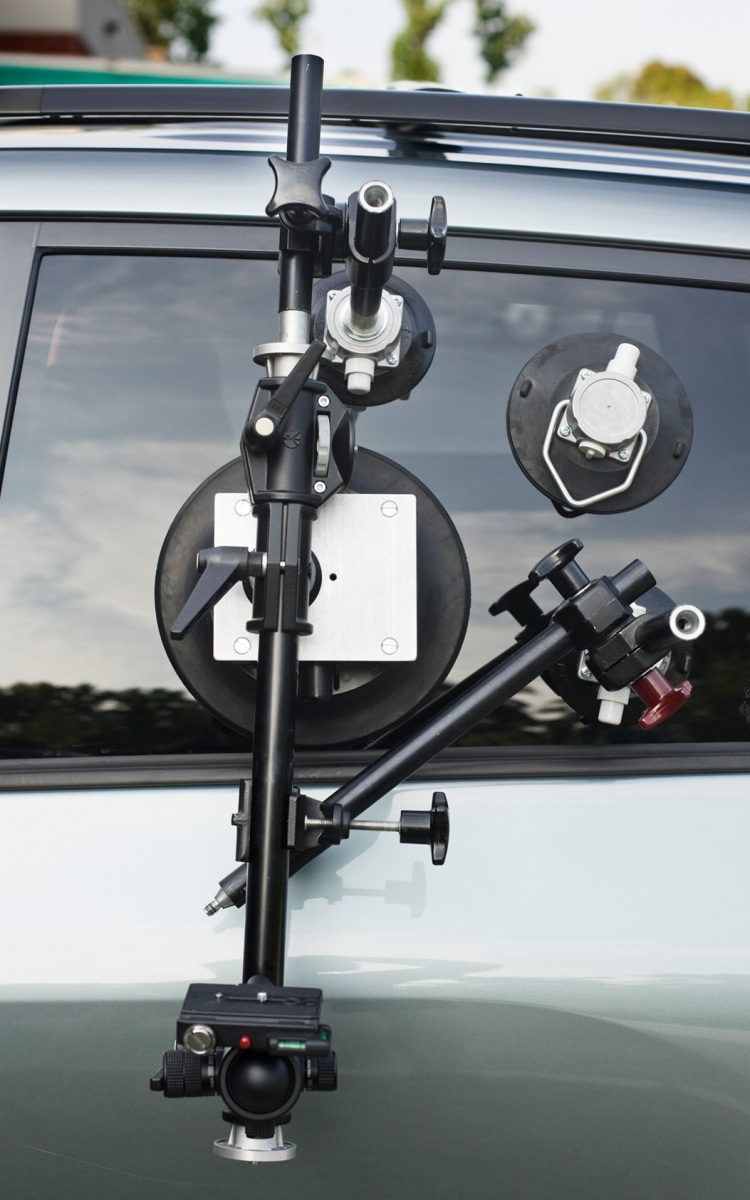 This actually shows the entire camera mount system for this application – main 10 inch cup with two additional 4 inch cups with securing Combitubes. Also shown is the 6 inch cup with the flip handle to which the camera tether attaches.

The final part is the Giottos MH1300 Ball Head. It originally came with the 657 slide plate system, but I preferred the 621. It is rated to hold up to 20 lbs. Note the tether holding the camera strap. 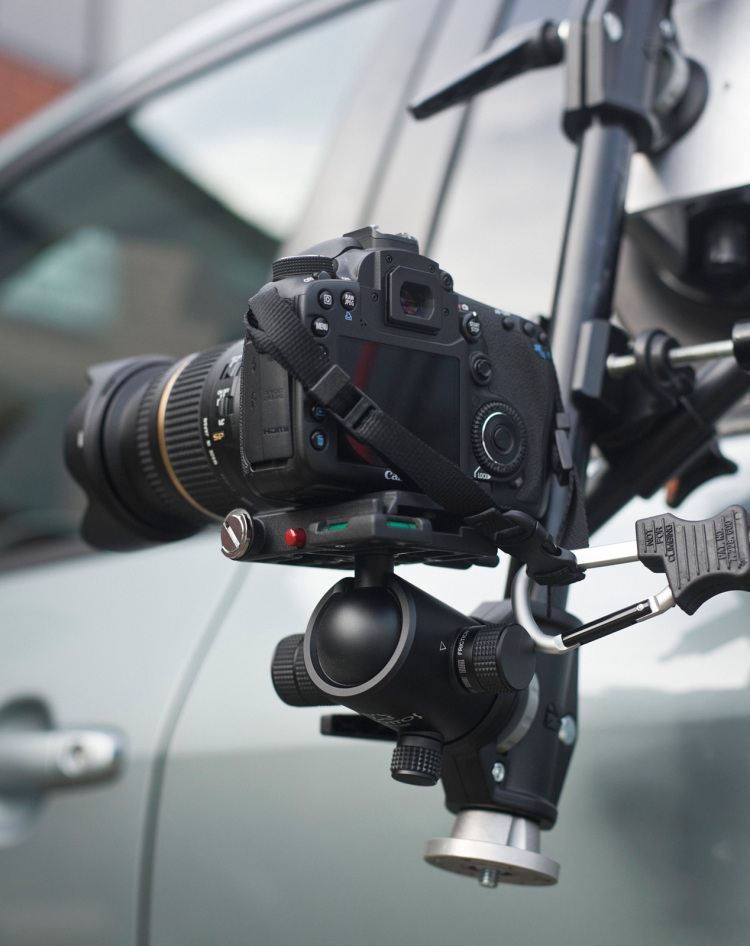 Giottos MH1300 ball head shown on my custom car mount system attached to a Manfrotto 131DDB which is attached to a Woods PowerGrip 10 inch cup. Canon 7D is mounted to the head.

I have found from testing that the camera can bounce/jiggle quite a bit if the mounting system is not secured to the glass on my RAV 4. There are several places that the sheet metal is rigid enough on my RAV 4 to mount a cup and get acceptable results, but wider angle lenses are usually needed to accomplish this. The glass and the most rigid sheet metal perform the best with the widest range of lens choices. 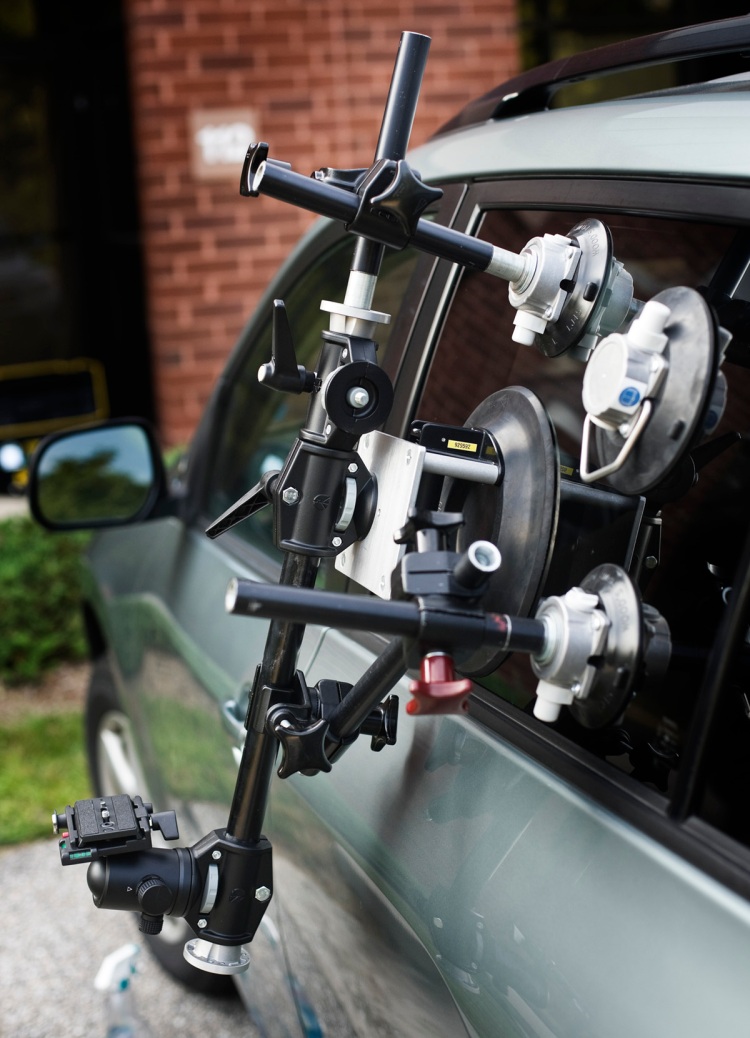 My system from behind without the camera mounted. 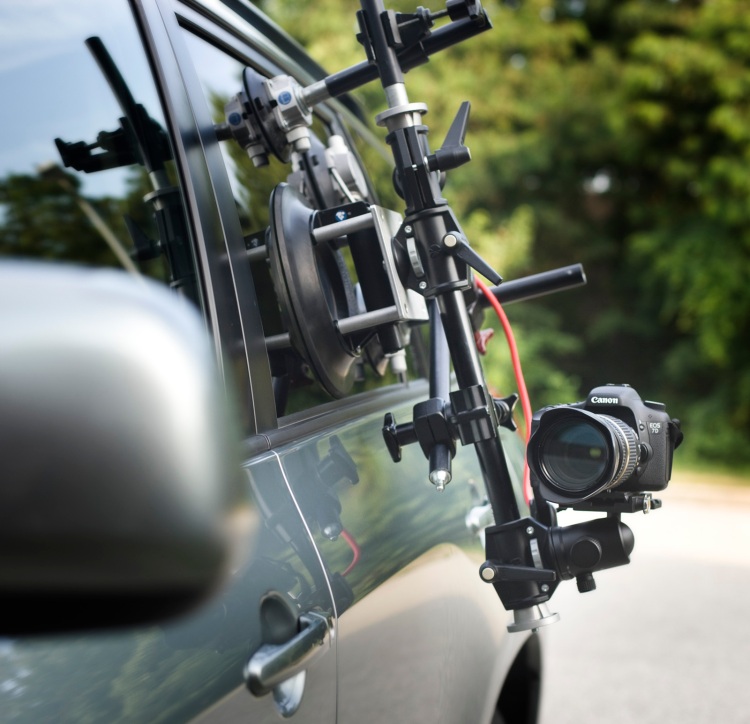 Front view of my car mount system with Canon 7D mounted on the Giottos head. Remember that this system is made up of many parts and a camera may be secured to a car in an infinite number of ways. 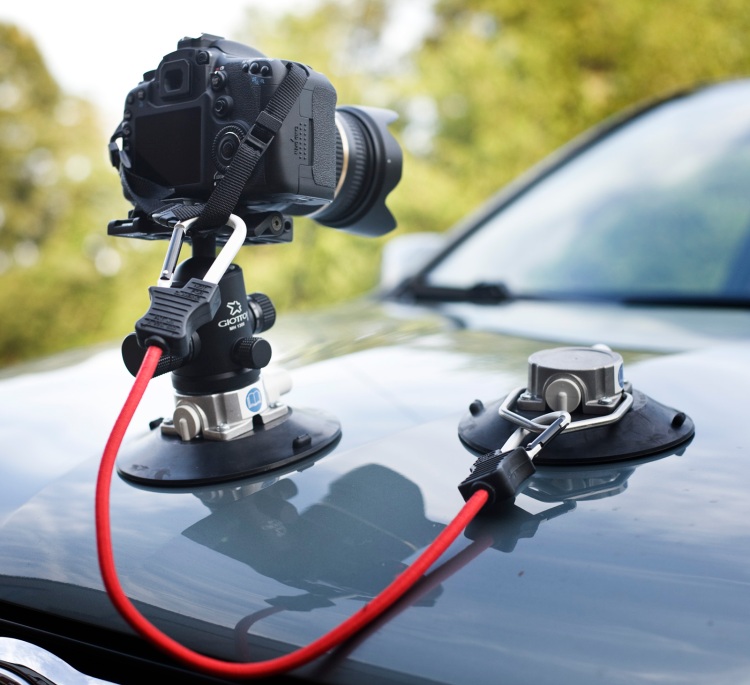 This shows the 6 inch Woods PowerGrip (3/8 inch 16 stud, Giottos MH 1300 head attached) holding the Canon 7D. The 6 inch cup with the flip handle has a tether that secures the head/camera in case of a cup failure.

One of the things that came up during my research was the idea of securing the camera with a tether independently of the camera cup mount. Note in the photograph above that a tether attaches the camera to a Woods PowerGrip 6 inch cup with a flip handle. This cup is rated to hold up to 70lbs as is the 6 inch cup that holds the Canon 7D. The photo above also shows how versatile the cups are. I have used the 6 inch cup that holds the ball head on the hood of my RAV 4 and gotten acceptable footage at speeds up to 50mph.

One additional thing about the Woods PowerGrip cups. These cups are quite ingenious. They have a red line on the pump that hides when the cup is fully secured and visible when the cup has lost suction. Note the image below. The red line is showing and it needs re-pumping to secure the cup. Note, as well, in the image showing the camera mounted to the side of the RAV 4 I can see all the pump buttons from my side mirror. This is not by accident. It allows me to see if a cup might be losing vacuum and needs some attention to re-secure it to the vehicle. 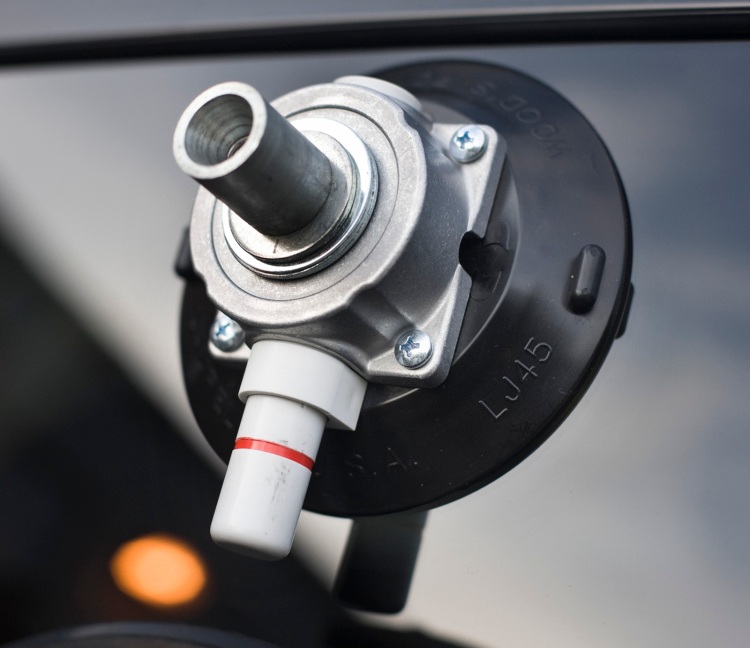 Photo of the 4 inch Woods PowerGrip with the pump red line showing. This means that the cup has lost vacuum and needs attention. 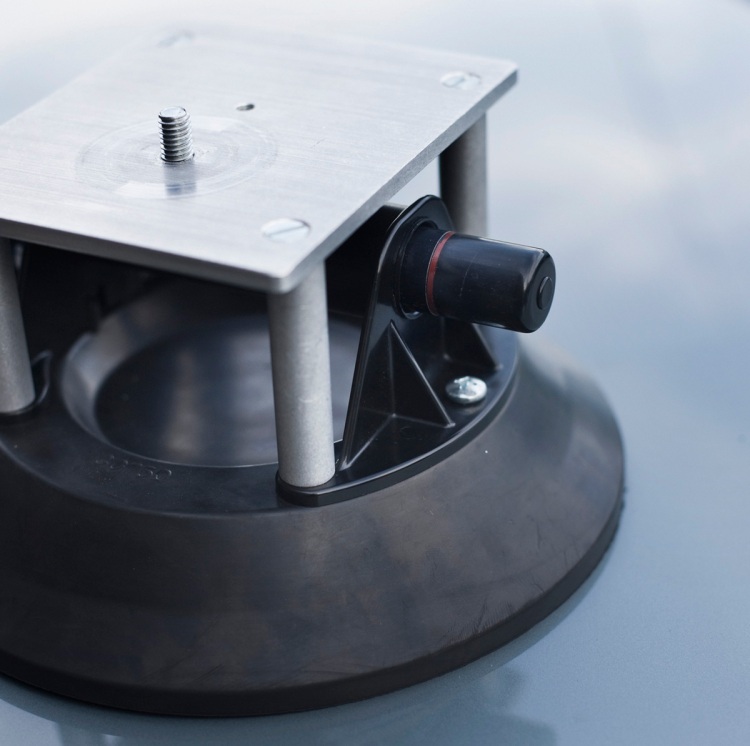 This photo shows a 10 inch Woods PowerGrip cup that needs re-pumping to secure it to the surface. Note the red line showing on the pump cylinder. 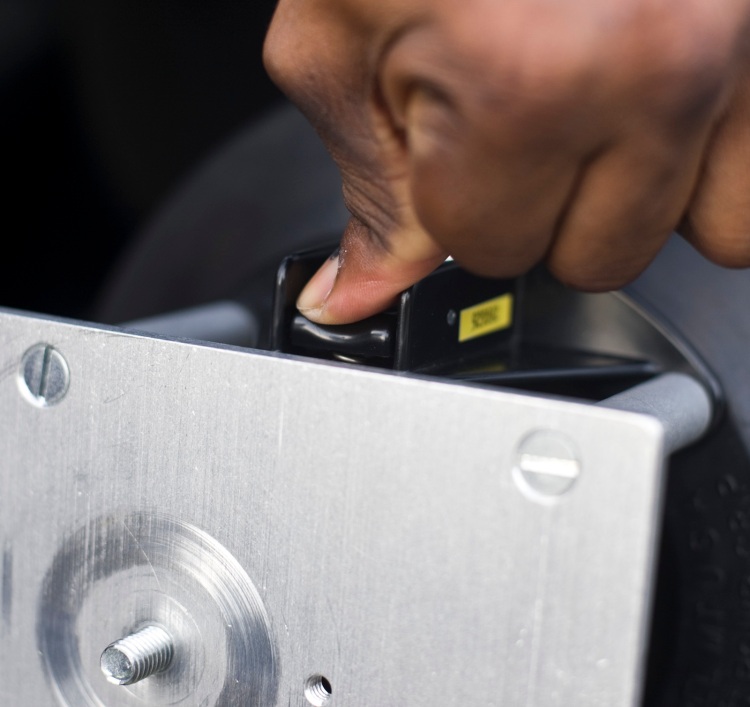 The 10 inch cup has a release lever. It has so much suction power that you cannot remove it by hand when the vacuum is solid. The smaller cups have a nub on the outer edge of the cup that you lift to deplete the vacuum and remove the cup.

I will post more on this topic in the future as well as footage captured using this system. Until then thoughts and comments are welcome.

All images ©2010 by Bill Deuster. All rights reserved.